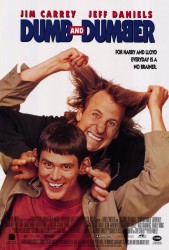 Storyline: Harry and Lloyd are two good friends who happen to be really stupid. The duo set out on a cross country trip from Providence to Aspen, Colorado to return a briefcase full of money to its rightful owner, a beautiful woman named Mary Swanson. After a trip of one mishap after another, the duo eventually make it to Aspen. But the two soon realize that Mary and her briefcase are the least of their problems.