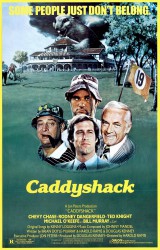 Storyline: Comical goings on at an exclusive golf club. All the members are wealthy and eccentric, and all the staff are poor and slightly less eccentric. The main character is 'Danny'; he's a caddy who will do almost anything to raise money to go to college. There are many subplots, including the assistant green keeper's pursuit of a cute (obviously stuffed) gopher.