EMDB > B > The 'Burbs
Previous Next 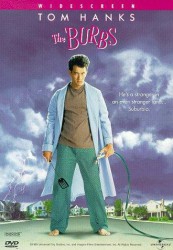 Storyline: This story takes place in a typical American neighborhood, when some new neighbors come to live in the house next to Ray Peterson. These new people are really strange; nobody has ever seen them, their house is a real mess, and during the night you can hear weird noises from their basement. The only thing they know is their name: Klopeks. One day Walter (an old man of the neighborhood) suddenly disappears and everyone starts to suspect the Klopeks...