EMDB > W > Where the Heart Is
Previous Next 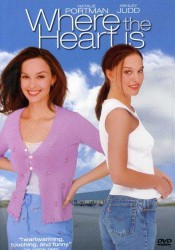 Storyline: Novalee Nation is a pregnant 17-year-old from Tennessee heading to California with her boyfriend Willie Jack, but is abandoned by him at a Wal-Mart store in Sequoyah, Oklahoma. Novalee has no job, no skills and only $5.55 in her pocket, so she secretly lives in the Wal-Mart until her daughter Americus is born six weeks later. Novalee decides to raise her daughter and rebuild her life in Sequoyah, with the help of eccentric but kind strangers. Based on the best-selling novel by Billie Letts.