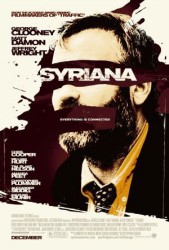 Storyline: American oil companies Connex and smaller Killen are undergoing a merger, the new company named Connex-Killen. The move is in response to Connex losing a number of oil fields in the Persian Gulf region as Prince Nasir Al-Subaai, his country's foreign minister, and the oldest son of the Emir and thus the heir apparent to the throne, signed a contract with the Chinese instead. As Killen somehow managed to get the contract for the oil fields in Kazahkstan, the merger would give Connex-Killen additional control of the industry in the Middle East. Connex's retained law firm, headed by Dean Whiting, assigns Bennett Holiday to demonstrate to the US Department of Justice that due diligence has been done to allow the merger to proceed i.e. that the merger would not break any antitrust regulations. The US government is unhappy with Prince Nasir's decision to award the contract to the Chinese, and in combination with issues around illegal weapons, the CIA assigns field agent Bob Barnes, who has ...