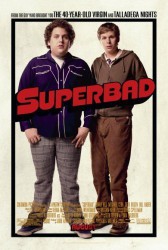 Storyline: Seth and Evan are best friends, inseparable, navigating the last weeks of high school. Usually shunned by the popular kids, Seth and Evan luck into an invitation to a party, and spend a long day, with the help of their nerdy friend Fogell, trying to score enough alcohol to lubricate the party and inebriate two girls, Jules and Becca, so they can kick-start their sex lives and go off to college with a summer full of experience and new skills. Their quest is complicated by Fogell's falling in with two inept cops who both slow and assist the plan. If they do get the liquor to the party, what then? Is sex the only rite of passage at hand?