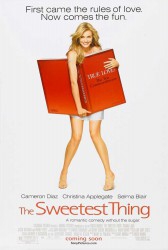 Storyline: To ease their roommate through a relationship-induced depression, Christina Walters and Courtney Rockcliffe take her out on the town. During their attempts to find her "Mr. Right Now", Christina meets Peter Donahue. Missing her opportunity with him that night, Christina is talked into pursuing him to his brother's wedding.