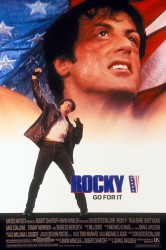 Storyline: Rocky Balboa is forced to retire after having permanent damage inflicted on him in the ring by the Russian boxer Ivan Drago. Returning home after the Drago bout, Balboa discovers that the fortune that he had acquired as heavyweight champ has been stolen and lost on the stockmarket by his accountant. His boxing days over, Rocky begins to coach an up-and-coming fighter named Tommy Gunn. Rocky cannot compete, however, with the high salaraies and glittering prizes being offered to Gunn by other managers in town.