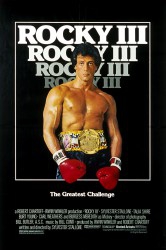 Storyline: In a string of 3 and a half years after defeating former champion Apollo Creed and winning the World Heavyweight Title, Rocky has had 10 successful title defenses and is still the Heavyweight Champion of the World. At his retirement fight, Rocky loses his Title to ruthless and dangerous challenger, Clubber Lang (Mr. T) who also inadvertently kills his coach and father figure, Mickey Goldmill, Rocky goes in a depression. He holds himself responsible for Mickey's death. His former nemesis and fomer Heavyweight Champion Apollo Creed, trains rocky for his rematch with Lang, but Rocky is too broken down and finally Adrian, his wife confronts him and he regains his focus, trains hard and finally is able to defeat Clubber by knocking him out in the 3rd round(Clubber had knocked him out in the second round of the first fight) and regains his Title and him and Apollo becoming great friends thereafter.