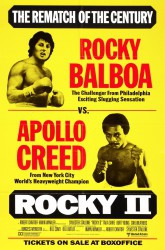 Storyline: Rocky Balboa is enjoying life. He has a lovely wife, Adrian, had a successful fight with Apollo Creed and is able to enjoy the money he earned from the fight and a new endorsement deal. Unfortunately, Rocky becomes embarrassed when failing to complete an advert and ends up working in a meat packing company. He believes that he will no longer have a career as a boxer. Apollo wants to rematch with Rocky to prove all his critics wrong that he can beat Rocky. Can Rocky once again have a successful fight?