EMDB > R > The Relic
Previous Next 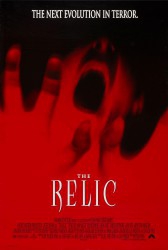 Storyline: A researcher at Chicago's Natural History Museum returns from South America with some crates containing his findings. When the crates arrive at the museum without the owner there appears to be very little inside. However, police discover gruesome murders on the cargo ship that brought the crates to the US and then another murder in the museum itself. Investigating the murders is Lt. Vincent D'Agosta who enlists the help of Dr. Margo Green at the museum - she has taken an interest in the contents of her colleague's crates. Unknown to both there is a large creature roaming the museum which is gearing itself up for a benefit reception which the city's mayor is to attend.