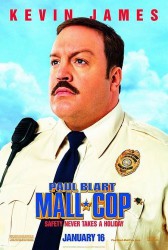 Storyline: Paul Blart is a mild-mannered man who works as a security guard in a New Jersey mall. For years, he has applied to become a cop, but he always fails the physical exam because he is overweight. One day, a gang of organized criminals put the mall under siege and take hostages. Blart becomes trapped inside, and because of his sense of duty, refuses to leave. He thus becomes the police department's eyes on the inside and attempts to stop the criminals on his own.