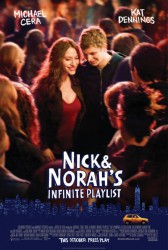 Storyline: It's been three weeks, two days, and 23 hours since Tris broke up with Nick. And now here she is at his gig, with a new guy. How could she have moved on so fast? This begins the night of Nick, Norah and Manhattan. The night of stripping nuns, hotel ice rooms, Russian food, psychotic ex-boyfriends and lovingly trashy ex-girlfriends. It's the night of Julio and Salvatore. The night of holding hands and writing songs and singing in the rain. It's a night they'll never forget.