EMDB > N > New York, I Love You
Previous Next 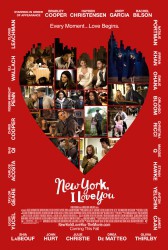 Storyline: Eleven vignettes, all homages to New York City life, are presented. I. Ben, a pickpocket, is attracted to Molly on first sight, and gets into an interesting "pissing match" with Molly's married lover, NYU professor Garry. II. Mansuhkhbai, an orthodox Jain diamond wholesaler, and Rifka, an orthodox Jewish diamond retailer who is getting married tomorrow, learn that they have more in common than just diamonds. III. David, a musician and music editor for a video being directed by Abarra, is having problems meeting Abarra's demands while he slowly falls for Abarra's assistant, Camille, who he's never met but has only talked to on the telephone solely about work. IV. A young man believes he's made a powerful connection to a stranger, a young woman, in the simple act of lighting her cigarette, and proceeds to convince her of the same and as such that there is a future for them from that point on, and not at some unspecified time down the road. V. A high school senior, who has been dumped by...