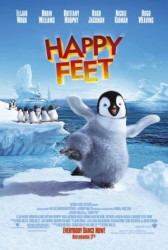 Storyline: This is the story of a little penguin named Mumble who has a terrible singing voice and later discovers he has no Heartsong. However, Mumble has an astute talent for something that none of the penguins had ever seen before: tap dancing. Though Mumble's mom, Norma Jean, thinks this little habit is cute, his dad, Memphis, says it "just ain't penguin." Besides, they both know that, without a Heartsong, Mumble may never find true love. As fate would have it, his one friend, Gloria, happens to be the best singer around. Mumble and Gloria have a connection from the moment they hatch, but she struggles with his strange "hippity- hoppity" ways. Mumble is just too different--especially for Noah the Elder, the stern leader of Emperor Land, who ultimately casts him out of the community. Away from home for the first time, Mumble meets a posse of decidedly un-Emperor-like penguins--the Adelie Amigos. Led by Ramon, the Adelies instantly embrace Mumble's cool dance moves and invite him to party with...