EMDB > A > About Schmidt
Previous Next 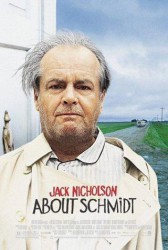 Storyline: Warren Schmidt has led a safe, predictable life working in the insurance industry in Omaha, Nebr. for many years, yet now faces retirement. At the same time he is forced to take a hard look at his wife, his life and his relationship with his estranged daughter. An often hilarious series of events follow as Schmidt embarks on an unpredictable RV journey to attend his daughter's wedding in Denver.