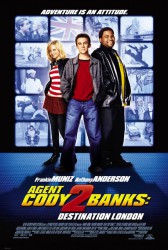 Storyline: One year later, agent Cody Banks is back for another awesome adventure but this time he must track down a former instructor who's gone rogue with a mind-control microchip. Banks masquerades as a musical prodigy to get close to a snobby, egocentric scientist in London who's the only person who can make the microchip work. Along the way Banks hooks up with a demoted agent and a cute-as-a-bug Scotland Yard operative. When Agent Cody Banks heads to England to catch an evil scientist who's stolen a mind-control device for his plot to rule the world and turning the world leaders into zombies!