EMDB > F > The Fighter
Previous Next 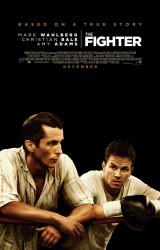 Storyline: The Fighter is a drama about boxer "Irish" Micky Ward's unlikely road to the world light welterweight title. His Rocky-like rise was shepherded by half-brother Dicky, a boxer-turned-trainer on the verge of being KO'd by drugs and crime.