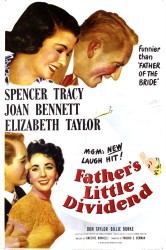 Storyline: In this sequel to Father of the Bride (1950), Stanley Banks learns that his daughter Kay is going to have a baby. When they get the news everyone except Stanley is overjoyed. His wife and grandmother-to-be Ellie broadcasts it everywhere and all Stan can do is worry about the practical things like how his son-in-law Buckley can afford it. Well, having not long ago paid for the wedding, Stanley has no intention of bearing any of the expenses involved. Buckley's parents and Ellie are overjoyed at the news and virtually take over redecorating the young couple's new house. Crisis and false alarms take over their lives and when the child is born, the only person he doesn't seem to like is Stanley. A walk in the park - and absolute panic when Stanley misplaces his grandson - seems to resolve the situation.