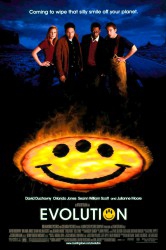 Storyline: When a meteorite falls to Earth two college professors, Dr. Ira Kane and Prof. Harry Phineas Block, are assigned the job of checking the site out. At the site, they discover organisms not of this planet. Soon the site is taken over by the government, forcing Ira and Harry to the side. As the new life-forms begin to evolve and start to get more and more dangerous, it's up to the two professors to save the planet.