EMDB > E > Eight Below
Previous Next 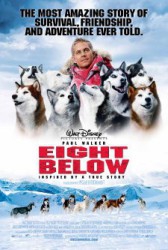 Storyline: In the Antarctic, after an expedition with Dr. Davis McClaren, the sled dog trainer Jerry Shepherd has to leave the polar base with his colleagues due to the proximity of a heavy snow storm. He ties his dogs to be rescued after, but the mission is called-off and the dogs are left alone at their own fortune. For six months, Jerry tries to find a sponsor for a rescue mission while his dogs fight for survival.