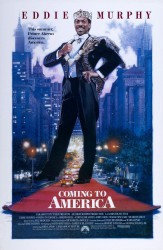 Storyline: It is the 21st birthday of Prince Akeem of Zamunda and he is to marry a woman he never saw before. Now the prince breaks with tradition and travels to America to look for the love of his life.