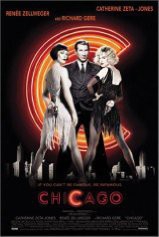 Storyline: Murderesses Velma Kelly (a chanteuse and tease who killed her husband and sister after finding them in bed together) and Roxie Hart (who killed her boyfriend when she discovered he wasn't going to make her a star) find themselves on death row together and fight for the fame that will keep them from the gallows in 1920s Chicago.