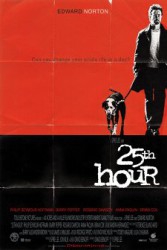 Storyline: The 25th Hour depicts the last day of freedom for a young man before he begins serving a seven-year jail term for drug dealing. Prowling through the city until dawn with his two close male friends and his girlfriend, he is forced to re-examine his life and how he got himself into his predicament, which leads to a shocking, disturbing finale.