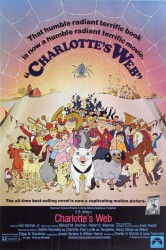 Storyline: Based on the beloved children's novel by E.B. White, this is the story of a little pig named Wilbur who was born a runt. Mr. Arable decides to kill him for dinner food but his daughter Fern begs him to let him live. On greater maturity, Wilbut is sold to Fern's uncle, Homer L. Zuckerman, in whose barnyard he's left yearning for friendship, but is snubbed by other barn animals. Wilbur is scared of the end of the season, because he knows that come that time, he will end up on the dinner table. He hatches a plan with Charlotte, a gentle and wise grey spider that lives in his pen, to ensure that this will never happen.