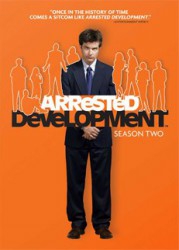 Storyline: Meet the wildly dysfunctional Bluth family. This family was once at the height of real estate development in Orange County, California. But when the family business - the Bluth Company - goes bust, they're suddenly found penniless with their assets frozen. They move into their last remaining asset - the model home left over from their latest housing tract. Their luxury vehicles are replaced with a reminder of the family's former wealth - the stair car that accompanied their private jet. The patriarch of the family is George Bluth - he's now in prison, and loving every minute of it. His wife Lucille and daughter Lindsay are spoiled socialites who can't handle getting kicked out of family restaurants. His son Buster is in his mid 30's and lives at home. His son George Oscar Bluth is a magician who started a group to get magicians to be taken seriously - and gets kicked out when his own tricks are revealed. Lindsay is married to a man named Tobias Funke, once a psychiatrist, who decides ...