EMDB > B > Broken Arrow
Previous Next 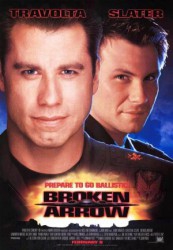 Storyline: "Broken Arrow" is the term used to describe a nuclear device that has been lost. In this movie, two nuclear missiles are stolen by rogue US pilot Deakins, but hot on his trail is his co-pilot Hale and a Park Ranger, Terry. The action takes place in Utah's canyon country; a high stakes game of cat and mouse.