EMDB > U > Up
Previous Next 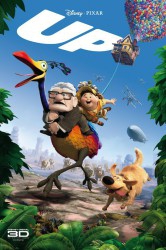 Storyline: Carl Fredricksen as a boy wanted to explore South America and find the forbidden Paradise Falls. About 64 years later he gets to begin his journey along with a Boy Scout named Russel with help from 500 balloons. On their journey they discover many new friends including a talking dog and Carl and Russel figure out that someone evil plans. Carl soon realizes that this evildoer is his childhood idol. Will they be able to defeat him and will they find Paradise Falls?