EMDB > M > The Men Who Stare at Goats
Previous Next 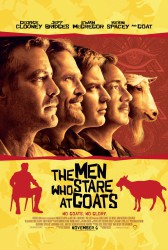 Storyline: A reporter, trying to lose himself in the romance of war after his marriage fails, gets more than he bargains for when he meets a special forces agent who reveals the existence of a secret, psychic military unit whose goal is to end war as we know it. The founder of the unit has gone missing and the trail leads to another psychic soldier who has distorted the mission to serve his own ends.