EMDB > H > How Do You Know
Previous Next 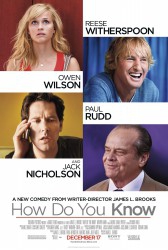 Storyline: Star softball player, Lisa, has just been cut from the national team; Scholarly business man, George, has just been indicted from his father's company. With everything that they know in their lives taken from them, Lisa and George attempt to find romance. Lisa's potential boyfriend, Matty, however, is as clueless and perpetually single as they come, and George's girlfriend just dumped him. A chance hook-up through mutual friends, Lisa and George may be able to form a friendship, or more, that can help them climb out of the piles of lemons that life has handed to them.