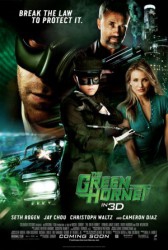 Storyline: Playboy Britt Reid (Seth Rogen) becomes the new publisher of Los Angeles' "The Daily Sentinel" after the sudden death of his father. Britt's party life is about to change when he and his driver and kung fu expert, Kato (Jay Chou), stop a robbery. With the help of Kato, Britt starts a new career of fighting crime as the masked superhero "The Green Hornet".