EMDB > B > The Boondock Saints
Previous Next 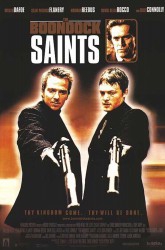 Storyline: Two Irish brothers accidentally kill mafia thugs. They turn themselves in and are released as heroes. They then see it as a calling by God and start knocking off mafia gang members one by one. Willem Dafoe plays the detective trying to figure out the killings, but the closer he comes to catching the Irish brothers, the more he thinks the brothers are doing the right thing.