EMDB > W > We Are Marshall
Previous Next 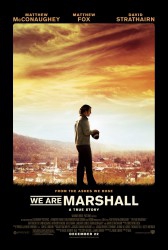 Storyline: In November, 1970, virtually the entire football team and coaches of Marshall University (Huntington, W.V.) die in a plane crash. That spring, led by Nate Ruffin, a player who was ill and missed the fatal flight, students rally to convince the board of governors to play the 1971 season. The college president, Don Dedman, must find a coach, who then must find players. They petition the NCAA to allow freshmen to play, and coach Jack Lengyel motivates and leads young players at the same time that he reexamines the Lombardi creed that winning is the only thing. The father and the fiancée of a player who died find strength to move on. Can Marshall win even one game in 1971?