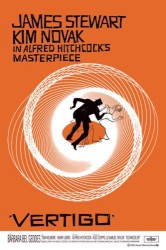 Storyline: John "Scottie" Ferguson is a retired San Francisco police detective who suffers from acrophobia and Madeleine is the lady who leads him to high places. A wealthy shipbuilder who is an acquaintance from college days approaches Scottie and asks him to follow his beautiful wife, Madeleine. He fears she is going insane, maybe even contemplating suicide, because she believes she is possessed by a dead ancestor. Scottie is skeptical, but agrees after he sees the beautiful Madeleine.