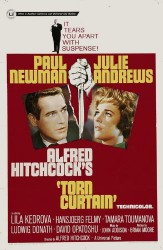 Storyline: Professor Michael Armstrong is heading to Stockholm to attend a physics conference accompanied by his assistant-fiancée Sarah Sherman. Once arrived however, Michael informs her that he may be staying for awhile and she should return home. She follows him and realizes he's actually heading to East Germany, behind the Iron Curtain. She follows him there and is shocked when he announces that he's defecting to the East after the US government canceled his research project. In fact, Michael is there to obtain information from a renowned East German scientist. Once the information is obtained, he and Sarah now have to make their way back to the West.