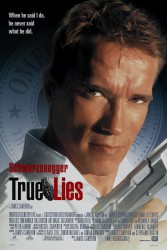 Storyline: Harry Tasker (Arnold Schwarzenegger) leads a double life. At work he is a government agent with a license to do just about anything, while at home he pretends to be a dull computer salesman. He is on the trail of stolen nuclear weapons that are in the hands of fanatic terrorists when something more important comes up. Harry finds his wife is seeing another man (Bill Paxton) because she needs some adventure in her life. Harry decides to give it to her, juggling pursuit of terrorists on one hand and an adventure for his wife on the other while showing he can Tango all at once.