EMDB > S > Stick It
Previous Next 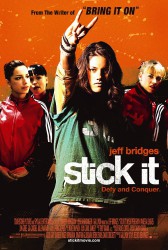 Storyline: Haley Graham is a former gymnast-turned-juvenile delinquent who, after one too many run-ins with the law, is forced to enroll at an elite gymnastics academy, the VGA in Houston, Texas which is run by the legendary Olympic gymnast Burt Vickerman. But the rebellious Haley is not welcomed into the academy by the other teenage gymnasts who despise her for walking out on her Junior Olympic team years earlier during a competition which cost them the gold medal. But Haley is not a docile person either and makes every effort to provoke conflicts with the other girls. Vickerman takes it upon himself to coach Haley in his own way to make her regain her self respect for the VGA's coming spot on the Gymnastic Nationals.