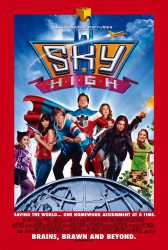 Storyline: It all begins when young Will Stronghold, the son of the two famous superheroes: Steve and Josie, A.K.A. the incredibly strong, seemingly invulnerable Commander and and the high-speed flying Jetstream. However, Will does not actually know if he has any powers of his own, and has not told his parents this. He and his best friend, Layla are facing their first day of a secret school in the clouds like none on earth: Sky High, the first and only high school for kids with super-human powers going through crime-fighting puberty. But with no apparent superpowers of his own, however, Will seems destined to grow up a mere sidekick. But as he discovers his true strengths, he'll also learn that it takes loyalty and teamwork to truly become a hero!