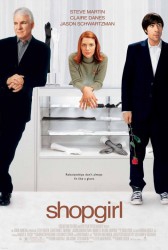 Storyline: Twenty-something native Vermonter Mirabelle Buttersfield, having recently graduated from college, is finding her new life in Los Angeles not quite what she was expecting or hoping. An aspiring artist, she is barely eking out a living working as a clerk at the women's evening gloves counter at Saks Fifth Avenue in Beverly Hills and thus she can barely make the payments on her massive student loans. She treats her job with a certain distance, often daydreaming as she watches the life of the rich as they shop at the store. She has made no friends, including from among her Saks colleagues, and thus lives a solitary existence, which does not assist in her dealing with her chronic clinical depression. So it is with some surprise that two men with a romantic interest in her enter her life almost simultaneously. The first is poor slacker Jeremy, who works as an amplifier salesman/font designer. Mirabelle continues dating Jeremy as only a relief to her solitary life, as Jeremy doesn't seem to ...