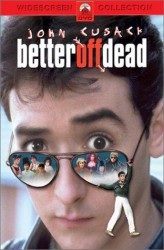 Storyline: The teenager Lane Meyer has a crush on his girlfriend Beth Truss. When Beth dumps him to stay with the successful skier Roy Stalin, Lane is depressed and decides to commit suicide. However he gives up and tries to improve his skill of skier to ski the dangerous K12 slope to impress Beth. Meanwhile his neighbor Mrs. Smith receives the exchange French student Monique Junot and her fat son Ricky Smith considers Monique his girlfriend; however, Monique has an unrequited crush on Lane that does not note her. When Lane stumbles upon Monique in a high-school party, he befriends her. The upset Lane challenges Roy in a competition on the K12 slope but then he regrets. However Monique is a great mechanic and skier, and fix Lane's Camaro and teaches him how to ski the K12 slope. What will happen to Lane?