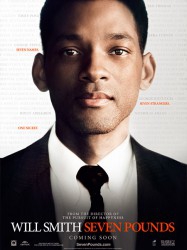 Storyline: Haunted by a secret, Ben Thomas looks for redemption by radically transforming the lives of seven people he doesn't know. Once his plan is set, nothing will be able to stop him. At least that's what he thinks. But Ben hadn't planned on falling in love with one of these people and she's the one who will end up transforming him.