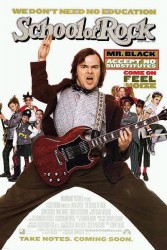 Storyline: Down and out rock star Dewey Finn gets fired from his band, and he faces a mountain of debts and depression. He takes a job as a 4th grade substitute teacher at an uptight private school where his attitude and hijinx have a powerful effect on his students. He also meets Zack, a 10-year-old guitar prodigy, who could help Dewey win a "battle of the bands" competition, which would solve his financial problems and put him back in the spotlight.