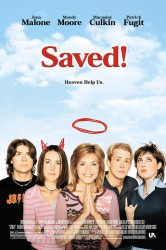 Storyline: Mary is a senior at American Eagle Christian High School in suburban Baltimore. She considers herself born again, despite the fact that her rebirth was at age three. Her best girlfriends are two classmates that comprise the Christian Jewels band with her. Hilary Faye is the alpha Christian, who outwardly is perfect, especially in her connection to God. And Veronica is ethnic Vietnamese who was adopted and thus saved by a black Christian couple. A third is Tia, who is generally an outsider in her geek status but who aspires to be in this Christian clique. Also within their social circle solely out of necessity is Hilary Faye's older brother Roland, who has been in a wheelchair since age nine after falling out of a tree, and who, out of family obligation Hilary Faye transports everywhere including to/from school. Beyond that transportation, Roland and Hilary Faye generally have disdain for each other. One of Hilary Faye's God driven missions for the year is to save Cassandra, a Jewish ...