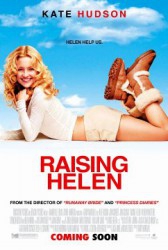 Storyline: Helen Harris is living the life she's always dreamed of: her career at a top modeling agency is on the rise; she spends her days at fashion shows and her nights at the city's hottest clubs. But her carefree lifestyle comes to a screeching halt when one phone call changes everything. Helen soon finds herself responsible for her sister's children: 15-year-old Audrey, 10-year-old Henry, and 5-year-old Sarah. No one doubts that Helen is the coolest aunt in New York, but what does this glamour girl know about raising kids? The fun begins as Helen goes through the transformation from super-hip to super-mom, but she quickly finds that dancing at 3a.m. doesn't mix with getting kids to school on time--advice that Helen's older sister, Jenny, is only too quick to dish out. Along the way, Helen finds support in the most unusual place--with Dan Parker, the handsome young pastor and principal of the kids' new school--and realizes the choice she has to make is between the life she's always loved ...