EMDB > S > Shadow of a Doubt
Previous Next 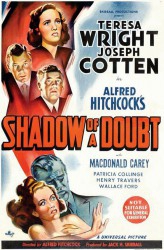 Storyline: Charlotte 'Charlie' Newton is bored with her quiet life at home with her parents and her younger sister. She wishes something exciting would happen and knows exactly what they need: a visit from her sophisticated and much traveled uncle Charlie Oakley, her mother's younger brother. Imagine her delight when, out of the blue, they receive a telegram from uncle Charlie announcing that he is coming to visit them for awhile. Charlie Oakley creates quite a stir and charms the ladies club as well as the bank president where his brother-in-law works. Young Charlie begins to notice some odd behavior on his part, such as cutting out a story in the local paper about a man who marries and then murders rich widows. When two strangers appear asking questions about him, she begins to imagine the worst about her dearly beloved uncle Charlie.