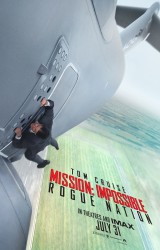 Storyline: CIA chief Hunley (Baldwin) convinces a Senate committee to disband the IMF (Impossible Mission Force), of which Ethan Hunt (Cruise) is a key member. Hunley argues that the IMF is too reckless. Now on his own, Hunt goes after a shadowy and deadly rogue organization called the Syndicate.