EMDB > A > Austin Powers in Goldmember
Previous Next 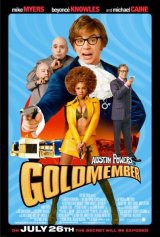 Storyline: He's found his mojo, baby, and now Austin Powers is back again in this shagadelic comedy-adventure! The "sshhh!" hits the fan when Dr. Evil and Mini-Me escape from prison. Joining forces with the superfreaky Goldmember, they kidnap Austin's father, master spy Nigel Powers, in a dastardly time-travel scheme to take over the world. Before you can say "Shake Your Booty," Austin cruises to 1975 and teams up with sexy Foxxy Cleopatra to stop Dr. Evil and Goldmember from their mischievous mayhem.