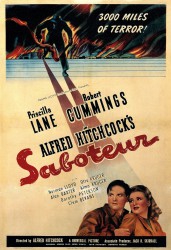 Storyline: Los Angeles aircraft worker Barry Kane evades arrest after he is unjustly accused of sabotage. Following leads, he travels across the country to New York trying to clear his name by exposing a gang of fascist-supporting saboteurs led by apparently respectable Charles Tobin. Along the way, he involves Pat Martin, eventually preventing another major act of sabotage. They finally catch up with Frank Frye, the man who actually committed the act of sabotage at the aircraft factory.