EMDB > I > In Good Company
Previous Next 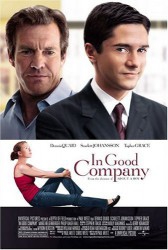 Storyline: Dan is a 51 year old executive who learns that his company is being restructured and he is being demoted. Carter, who is 26, replaces him. Dan who has two teenage daughters with another on the way, decides to suck it up and work for Carter. Dan and Carter's working relationship is tested when Carter begins a relationship with Alex, who is Dan's daughter.