EMDB > H > The Hoax
Previous Next 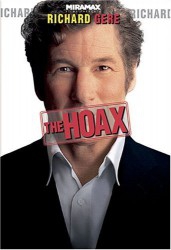 Storyline: Early in 1971, McGraw-Hill passes on Clifford Irving's new novel. He's desperate for money, so, against the backdrop of Nixon's reelection calculations, Irving claims he has Howard Hughes's cooperation to write Hughes's autobiography. With the help of friend Dick Suskind, Irving does research, lucks into a manuscript written by a long-time Hughes associate, and plays on corporate greed. He's quick-thinking and outrageously bold. Plus, he banks on Hughes's reluctance to enter the public eye. At the same time, he's trying to rebuild his marriage and deflect the allure of his one-time mistress, Nina Van Pallandt. Can he write a good book, take the money, and pull off the hoax?